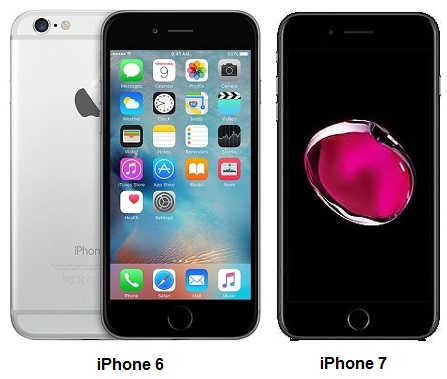 Are you able to find any physical difference between Apple iPhone 7 and Apple iPhone 6 or 6S, then you need to look harder. Even though there are no groundbreaking changes in the new iPhones there are a few which are worth a look.

We are not going to do any spec by spec comparison of the two Apple devices but going to highlight the new features only which are not there in it’s predecessor.

The new iPhone 7 and 7 Plus holds the latest and the fastest Apple A10 Fusion SoC when compared to the Apple A9 on it’s predecessors. It is the fastest mobile SoC released to date and it is also the first quad-core SoC from Apple which packs two high end CPU cores. Apple states that it has 40% greater CPU performance and 50% greater graphics performance compared to Apple A9 which holds a dual core processor.

To everybody’s surprise there is no audio jack on the new iPhone 7, which is replaced with the Apples own proprietary Apple Airpods which doesn’t need a wired connection. These wonderful creation from apple will wirelessly connect to your iPhone and can sense when they’re in your ears and can pause when you take them off. If you are a conventional headphone lover then you need to get an adapter which can be connected to the charging port to enjoy the music “through wires”. In Apples own words we need a “Lightning” to 3.5 mm headphone jack adapter to enjoy music through the charging port which is included in the box.

Actually there are no major changes in the rear camera, where both iPhone 7 and iPhone 6 holds a 12MP sensor. But in the case of iPhone 7 and 7 Plus the secondary camera is more powerful which holds a 7MP front camera against the 5MP sensor of iPhone 6.

iPhone 7 and 7 Plus are dust and water resistant up to 1 meter and 30 minutes with IP67 certification while it’s predecessor failed to have both of these.

If you have faced any comments to add, please don’t hesitate, feel free to post it in the comment section below, don’t worry I will help you as fast I can.

If “New Features In iPhone 7 & iPhone 7 Plus Which Are Not In iPhone 6 & 6S” comparison really helped you, please give a like/share on social networking websites by using the below given buttons.

Tags:6Siphone 6iPhone 7 PlusNew Features In iPhone 7Which Are Not In